800 years of humanist values at the Montpellier Faculty of Medicine 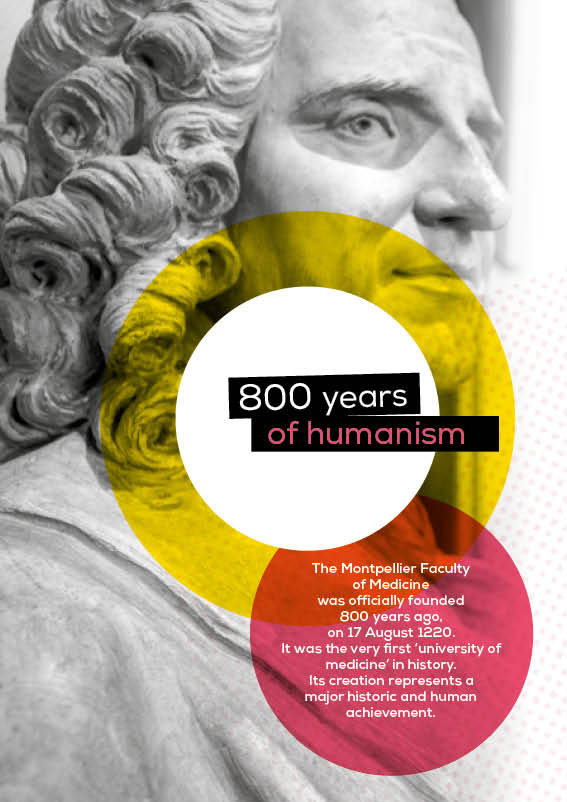 The creation of the concept of a ‘university’ was one of the most important developments of the Middle Ages. Up to that point, specialized, advanced teaching (in medicine and law) had been taking place from at least the year 1000, but had an ephemeral quality: subjects were uniquely taught by specific masters whose schools did not outlast them. This was the case of the medical schools in Salerno, Italy, which lacked a long-term, official structure and thus eventually disappeared. In contrast, in Montpellier, in 1220 the medical schools inspired by those in Salerno were grouped together into a universitas of teachers and students with respective obligations and duties, an operational organization, a system for validating knowledge, and the recognition of diplomas that would soon be universal throughout the Christian world. This official university status allowed medical teaching to survive over the next eight centuries in Montpellier.

That medical education could develop to this point in Montpellier as early as the 12th and 13th centuries is partly due to the city’s geographical location at the crossroads of Eastern and Western cultures, midway between the Italian and Iberian peninsulas, at the intersection of major land routes (the Roman Via Domitia and the Way of Saint James) and sea ports (in ancient times, Lattes, near Montpellier, was one of the most important ports in the Mediterranean between Genoa and Barcelona). In Montpellier, which was founded in 1000, manuscripts from Ancient Greek physicians (Hippocrates and Galen) were read, translated and taught. These manuscripts had been conserved by Arab thinkers and enriched by Arab-Persian science (notably through Avicenna), and then diffused around Europe from Andalusian, Sicilian and Latin cultural centres (for example, by Constantine the African). These manuscripts, transmitted through the generations in Arabic, were translated into Hebrew, and then into Latin in a Montpellier where Jews and Christians worked together in harmony. The creation of the medical school of Montpellier, then under the jurisdiction of the Crown of Aragon, a kingdom centred in what is now Catalonia, is a symbol of a Mediterranean melting pot of civilizations, the proof that peace is possible.

Over eight centuries, Montpellier’s ‘medical university’ developed with a singular academic outlook: humanism. Its motto (‘Hippocrates of Kos is now of Montpellier’) reflects its allegiance to and its adoption of the teachings of Hippocrates and his ethics (the first aphorism of Hippocrates is inscribed over the door of the Faculty of Medicine that welcomes students: ‘Life is short, the Art of medicine long’). The doctors in Montpellier in the Middle Ages were not just physicians, but were often also alchemists or diplomats or practitioners to popes. In the Renaissance, they were committed naturalists, interested as much in the animal and plant kingdoms as in anatomy; seeking to understand humans in the context of their environment and in all their dimensions. They were the first to carry out human dissections in France (as early as the 14th century), as well as the first to create a medicinal botanical garden. Rabelais, a physician in addition to being a humanist writer and scholar, urges his readers to ‘Live happily!’ in his novel Gargantua and Pantagruel – qualified with a reminder to follow certain rules of medical hygiene!

Over the ages and through the twists and turns of history, Montpellier’s medical school continued educating its students. Today, in an era transformed by new technology, the conviction remains that a humanist outlook is fundamental in medicine. Following 150 years of major advances made possible by experimental and quantitative medicine, Rabelais’s maxim is as true as ever: ‘Science without conscience is but the ruin of the soul.’ In Montpellier, for the last 800 years, medical science has been carried out with conscience. The commemoration of the eight centuries of existence of the Montpellier Faculty of Medicine is both a tribute to its long and illustrious past and the occasion to look toward the future.